About the Supreme Court of Israel 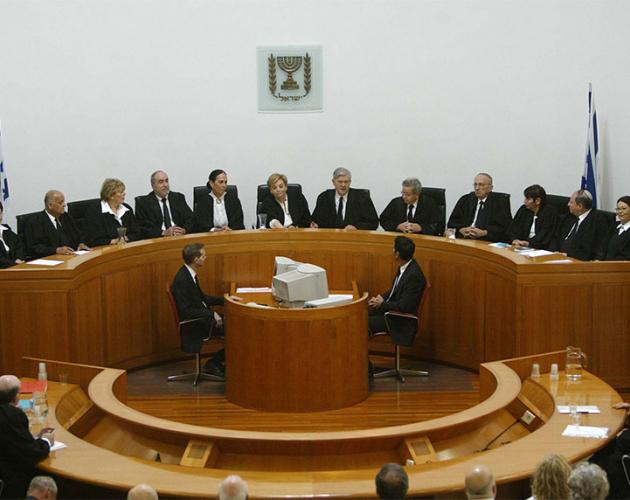 The largest of the five courtrooms in the Supreme Court building.

About the Supreme Court of Israel

Composition
The Supreme Court currently consists of fifteen justices; that number is established by the Knesset and has varied over the years. The most senior justice is designated President of the Court and the next senior justice is Deputy President. Justices (along with all other Israeli judges) are appointed by the Judicial Selection Committee, a body comprised of three Supreme Court Justices (including the President of the Supreme Court), two cabinet ministers (one of whom is the Minister of Justice), two Knesset members, and two representatives of the Israeli Bar Association.  Justices must retire upon reaching the age of 70.

Procedure
The Supreme Court generally sits in panels of three justices. The President or the Deputy President of the Court may expand the size of a panel to any uneven number of justices in cases of particular importance. In addition, each panel has the power to expand its own size.  After a panel ruling, particularly one that conflicts with a prior decision or is especially important, difficult, or novel, the Court may decide to hold a "further hearing" to review the panel's judgment; the panel for the further hearing will consist of at least five Justices.  (This procedure is a rough equivalent to en banc consideration in federal courts of appeals in the United States, although the panel on rehearing still does not include all members of the Court.)

Jurisdiction
The Supreme Court hears cases both in the first instance and on appeal.  Sitting as the High Court of Justice, it has original jurisdiction in cases challenging the legality of actions by public authorities, exercising jurisdiction "in matters in which it considers it necessary to grant relief in the interests of justice and which are not within the jurisdiction of any other court or tribunal."  As an appellate court, the Supreme Court has both a mandatory and a discretionary docket.  Cases that begin in District Court (such as serious criminal prosecutions and civil cases with large amounts in controversy among other matters) can be appealed to the Supreme Court as of right.   Cases that begin in the Magistrates' Courts, which are Israel's basic trial courts, can be appealed as of right to the District Court but reach the Supreme Court only if it grants leave to appeal.  (A recent study found that the Court granted leave to appeal in 15% of civil cases and 6% of criminal cases.)  The Court decides more than 10,000 cases annually.

Israel’s "Constitutional Revolution"
Israel's Declaration of Independence called for the swift drafting of a written constitution for the new country.  That did not happen.  Instead, beginning in 1958, the Knesset enacted eleven “Basic Laws” which establish the country’s basic political institutions.  Of these, the most consequential for the Supreme Court (in addition to, of course, the Basic Law on the Judiciary) have been the Basic Law on Human Dignity and Liberty and the Basic Law on Freedom of Occupation, enacted in 1992 (though the latter was replaced by a revised version in 1994). The Supreme Court interpreted the 1992 Laws as implicitly affording the Court the power of judicial review.  The watershed decision was United Mizrahi Bank v. Migdal Cooperative Village (1995).  In his opinion in Mizrahi, President Barak described passage of the 1992 Basic Laws as "a constitutional revolution."  That phrase is often quoted, though generally with regard to the Mizrahi decision itself rather than the Basic Laws on which it relied.

The Supreme Court  Bulding
The Israeli Supreme Court occupies what New York Times architecture critic Paul Goldberger has called “Israel’s finest public building.”  Goldberger celebrated the “skillful” way the building combined “a sense of monumentality with a sense of easy, inviting accessibility,” its “serene sense of coherence,” the way in which “the sharpness of the Mediterranean architectural tradition and the dignity of the law are here married with remarkable grace,” and “the thoughtfulness [that went into] the building, which has been designed with consistent attention to the needs of all of its users.”  The building contains five courtrooms of different sizes, a library, chambers for the Justices, administrative offices, and expansive public spaces.  A virtual tour is available on the Court's own website.  The building opened in 1992 after a decade of planning and construction.  It was designed by the team of Ram Karmi and Ada Karmi-Melamede, an Israeli brother and sister, selected in an international competition. A valuable discussion of the architecture is Ada Karmi-Melamede, The Supreme Court Building, Israel, 26 Perspecta: Theater, Theatricality, and Architecture, pp. 83-93 (1990), available from J-Store here (subscription required). The building was a gift--an extraordinary one--to the Government and people of Israel from Dorothy de Rothschild and the Rothschild family foundation, Yad Hanavid. A 1984 letter from Dorothy de Rothschild to Prime Minister Shimon Peres, proposing to donate a new building for the Supreme Court, is displayed outside the President's chamber.  The Dorothy de Rothschild grove, with an obelisk at its center, commemorates the gift and its donor.