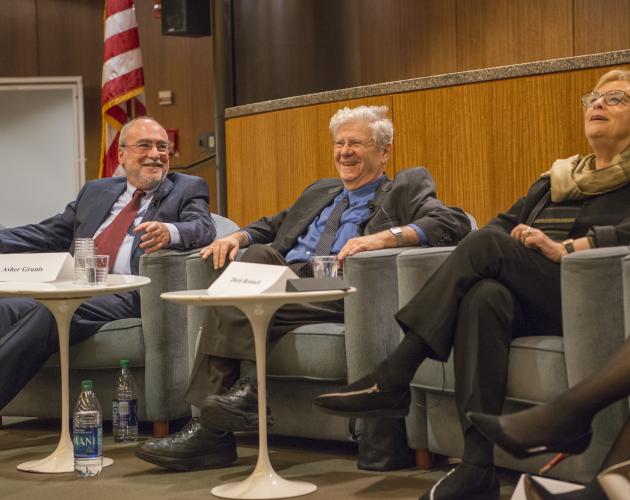 The three most recent Presidents of the Israel Supreme Court--Aharon Barak (1995-2006), Dorit Beinisch (2006-2012), and Asher Grunis (2012-2015)--will gather at Cardozo on November 9 for a wide-ranging conversation about the Court's operations, decisions, and role in Israeli government and society with ISCP Co-Directors Michael Herz and Suzanne Stone.

Please join us for this extraordinary event.

An RSVP is requested though not required.  Please email saphir@yu.edu and put "RSVP" in the subject line.

Aharon Barak was born in Kaunas, Lithuania in 1936. In 1947 the family immigrated to Israel and settled in Jerusalem. Barak received his legal training at the Hebrew University of Jerusalem, from which he received an LL.M. and an LL.D. at the Hebrew University, later joining the Faculty of Law and serving as its Dean.  Between 1975 and 1978, Barak served as the Attorney General of Israel. In 1978, he was appointed by Israeli Prime Minister Menachem Begin as the legal advisor to the Israeli delegation for negotiating the peace agreement with Egypt.  Barak was appointed to the Israeli Supreme Court in 1978. He served as President from 1995 until his retirement in 2006.  He is generally seen as the central figure in the “constitutional revolution,” the Court’s determination that Israel’s Basic Laws grant it the authority of judicial review over legislation.  Upon his retirement from the Supreme Court, Barak returned to academia, teaching at the Interdisciplinary Center in Herzliya and serving as a visiting lecturer at institutions around the world.

Asher D. Grunis was born in Tel Aviv, Israel in 1945.  Following his military service in the Israel Defense Forces, Justice Grunis earned an LL.B. from the Hebrew University of Jerusalem (Tel Aviv Branch) in 1969 and became a member of the Israel Bar.  In 1972, he received an LL.M. degree from the University of Virginia Law School in the United States, and was awarded a D. Jur. degree by Osgoode Hall Law School, York University, in Toronto, Canada.  From 1976 to 1987, he taught law at Tel Aviv University, and from 1980 to 1988 he worked in private practice.  In September 1988, he was appointed Judge of the Beer Sheva District Court, and in October 1996, he was appointed Judge in the Tel Aviv District Court.  In April 2002, he was appointed Acting Justice of the Supreme Court, and in June 2003, he was appointed Justice of the Supreme Court. He served as  President of the Court from 2012 until January 2015.

Aharon Barak was born in Kaunas, Lithuania in 1936. He survived the Holocaust, first living in the Kovno Ghetto and then in hiding with his mother in the home of a local peasant. In 1947 the family immigrated to Israel and settled in Jerusalem. Barak received his legal training at the Hebrew University of Jerusalem, completing an LL.M. in 1958. In 1963 he completed an LL.D. at the Hebrew University. Barak spent the academic year of 1966-1967 at the Harvard Law School, and upon his return he was appointed Associate Professor at the Hebrew University. In 1974 he was appointed Dean of the Law Faculty, and in 1975 he received the Israel Prize for his research in jurisprudence. Between 1975 and 1978, Barak served as the Attorney General of Israel. As Attorney General, Barak coined the term ‘The Buzaglo Test,’ a phrase which has become an Israeli idiom meaning that the law should treat alike all citizens, regardless of their genealogy or position. In 1978, he was appointed by Israeli Prime Minister Menachem Begin as the legal advisor to the Israeli delegation for negotiating the peace agreement with Egypt.

Barak was appointed to the Israeli Supreme Court in 1978. In 1993 he was appointed Deputy President, and he became President in 1995. Barak remained president of the Supreme Court until his retirement in 2006. Barak’s influence on the Supreme Court has been immense. He is a strong supporter and practitioner of legal activism. He greatly expanded the range of issues with which the court dealt by canceling the standing test which the Supreme Court had formerly used frequently, and he greatly expanded the scope of justiciability. Barak interpreted Basic Laws enacted in 1992, one regarding human dignity and liberty and another regarding freedom of occupation, as authorizing the Supreme Court to annul laws which violate human rights (in CA 6821/93 United Hamizrahi Bank Ltd. v. Migdal Kfar Shitufi 49(4) P.D 221). Thus, de facto, he is responsible for granting the Basic Laws the status of a constitution and thereby introducing judicial review into the Israeli legal system.

Upon his retirement from the Supreme Court, Barak has returned to academia, teaching Commercial Law at the Interdisciplinary Center in Herzliya and serving as a visiting lecturer in various institutions around the world, including Yale Law School, the University of Alabama, and the University of Toronto Faculty of Law. Barak has published numerous scholarly articles and books and has received awards and honorary degrees for his contributions to the field of jurisprudence.