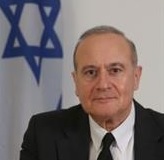 Yosef Elron was born in Israel in 1955. In 1973 he completed his high school studies at Erev Hadash High-School in Haifa, and served in the Israeli Defense Forces during the years 1973 to 1977. In 1977 he traveled to the United Kingdom and held from 1977 to 1980 various positions in security organizations. In 1983 he completed his law studies at Buckingham University. From 1983 to 1985 he interned in the Haifa District Attorney's Offices and in a law firm, and after being admitted to the Israeli Bar he practiced law from 1985 to 1994. In 1994 he was appointed to the Haifa Magistrates’ Court. In 2001 he completed at Haifa University his master's degree in political science, in the field of national security administration. In 2003 he was appointed Judge of the Haifa District Court, and in 2012 he was appointed Deputy President of that court. In 2013 he was appointed President of the Haifa District Court. In 2014 he was appointed Chairman of the Israel Bar Examination Committee. In October 2017 he was appointed Justice of the Supreme Court. Justice Elron authored the following articles: The Investigating Judge Under the Investigation of Causes of Death Law, 5718-1958 SHAMGAR'S BOOK – Articles, Part II (The Israel Bar Association Publishing House, 5763-2003); Acceptance of Evidence not under Law Procedure ADI AZAR'S BOOK – 12 HAMISHPAT (2007); Probation Survey and Victim Survey: Legal and Ethical Considerations in ISSUES IN PSYCHOLOGY, LAW AND ETHICS IN ISRAEL, DIAGNOSIS, TREATMENT AND JUDGMENT (Diunon Publishing House, 2008); Opposing Psychiatric Opinions – The Considerations Underlying the Judicial Decision in APPLIED ISSUES IN LEGAL PSYCHOLOGY (Probook Publishing House, 2011).