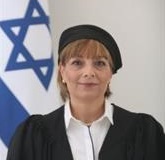 Yael Willner was born in Israel in 1959. She completed her high school studies at Horev High School in Jerusalem in 1977, and undertook national service in Kiryat Shmona in 1978. She completed her law studies at the Hebrew University of Jerusalem, earning her degree in 1982. During the years 1980 to 1981 she worked as a parliamentary assistant in the Knesset (the Israeli parliament). From 1981 to 1983 she interned at the Supreme Court (with Justice Moshe Bejsky) and at the State Attorney's Office (with Dorit Benish). After being admitted to the Israeli Bar she practiced law from 1983 to 1998. In 1998 she was appointed to the Haifa Magistrates’ Court. In 2004 she was appointed Registrar and Acting Judge of the Haifa District Court, and in 2006 she was permanently appointed to that court. In October 2017 she was appointed Justice of the Supreme Court.